These stuffed tortilla cups are unique and tasty, filled with a blend of potatoes, bacon, and chipotle peppers.

A few weeks ago, we got together with friends to watch the Super Bowl. I know it sounds strange, but my favorite part of getting together to watch football has always been creating fun foods to share.

To make these stuffed tortilla cups, I started by cooking a couple pieces of bacon, then setting that aside.  I sauteed a mirepoix, which is a blend of onions, carrots and celery, in the bacon grease.  This makes a flavorful base for almost any savory dish.

I added chopped potatoes, and sauteed until al dente.  Then I added two chipotle peppers in adobo sauce for a spicy and smoky flavor that gives it a unique twist.

I let the mix simmer in chicken broth and a little half and half until absorbed.

For the next step, I added small flour tortillas to the muffin tins. Then I spooned in hearty servings of the potato mix, then topped it with cheese.

The tortilla cups went into the oven for about 12 minutes, and came out crispy, golden brown, and absolutely delicious. 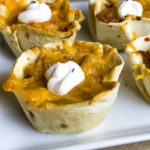 Save this recipe to your appetizer board so you can make it anytime you want!

I’m a New Mexican native who loves all things NM (especially the food)!  I visit all of the best New Mexican restaurants in the state and recreate their best dishes — sharing the recipes here!